We continued our journey from Berastagi to Lake Toba, once again by shared tourist car. This time, we were lucky enough to be sharing with a young Dutch couple, two young German lads & a fun driver.

Lake Toba a large natural lake occupying the caldera of a supervolcano. It is the largest lake in Indonesia & the largest volcanic lake in the world.

As soon as we saw Lake Toba from the top of the hill we were amazed. The scenery is like nothing we’ve seen in Indonesia & more reminiscent of the lakes in Italy, Germany or Switzerland… stunning.

We arrived to a beautiful sunset & boarded the ferry for Tuk Tuk on Samosir Island, by nightfall. Our accommodation was right on the water’s edge & a bargain for £14 per night. 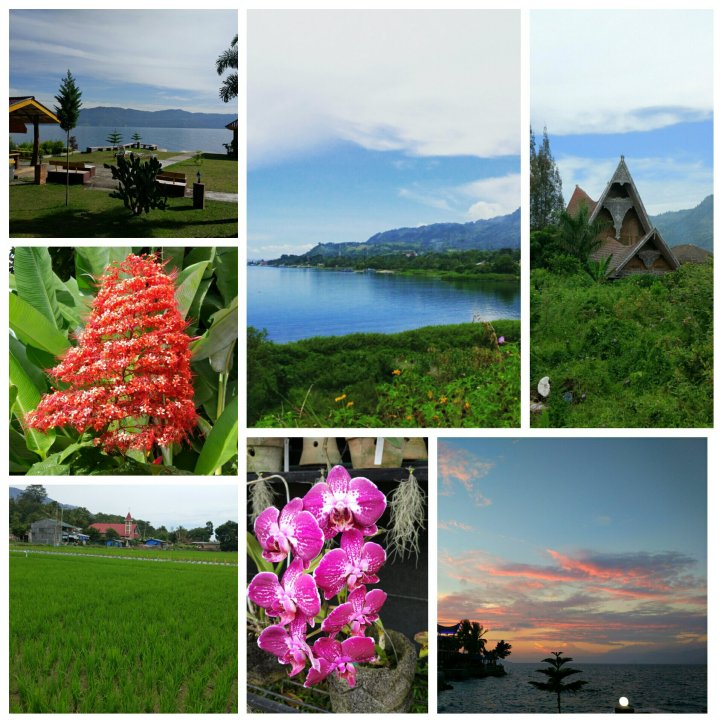 As soon as we arrived in Tuk Tuk, we knew we wanted to stay longer; so booked a total of 5 nights.

The problem being there are only 2 cash points in the island & notoriously empty; we’d only brought enough cash for 3 days & locals do not accept credit cards (like many of the places we stayed in Indonesia).

We tried walking to Tomok (the neighbouring village) on the first day, only 5k, but as hilly we gave up. The second day we hired bikes which should have been easier, however both chains came off, mine had only 3 gears & in the end I ended up pushing it up the hills!

Finally we got to Tomok & the ATM, & luckily it was working.

The island has a variety of dwellings from make shift to smart villas, but the traditional wooden Batak houses dominate the landscape.