Getting There
We decided to fly from Hanoi to Laos, to save a 24hr bus journey. We`re so glad we did, as when we arrived, we met a couple we knew (Hannah & Todd, who we`d met previously in Hanoi) & they told us it had taken 33hrs!

On arrival in Luang Probang town, we sat eating an amazing baguette stuffed full of egg, veg & chilli sauce, in the 38o heat & just smiled at each other. Laos is so utterly different from Vietnam: the traffic is sparse & you can cross the road easily; the people are so chilled & friendly; the tuk tuk drivers & vendors ask you once, then no more hassle; the Buddhist culture immediately sets your mind at rest & the food … oh the food!

Luang Probang
Luang Probang is the most popular place in Laos for tourists to visit. It is situated on a junction between the mighty Mekong & the Nam Khan rivers. 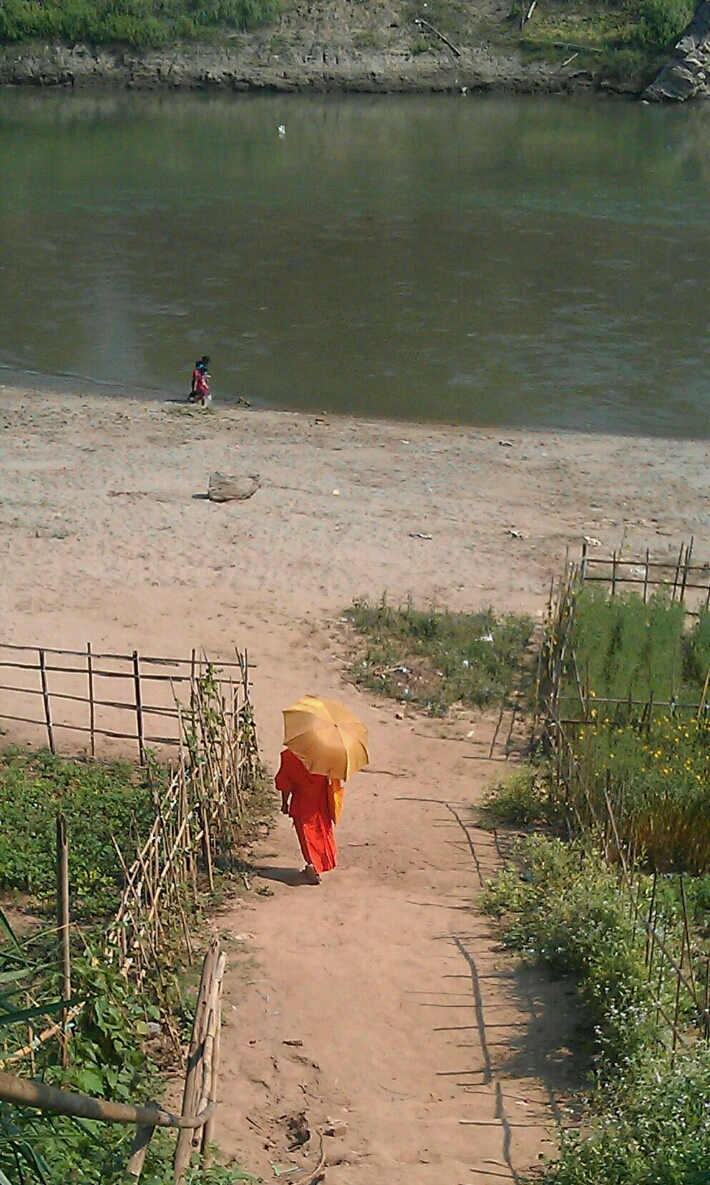 Lonely Planet describes the UNESCO protected town as `… one of the most alluring places in South East Asia. Nowhere else can lay claim to the city`s old world romance, with 33 gilded Wats, saffron-clad monks, faded Indochinese villas & exquisite Gallic cuisine`. 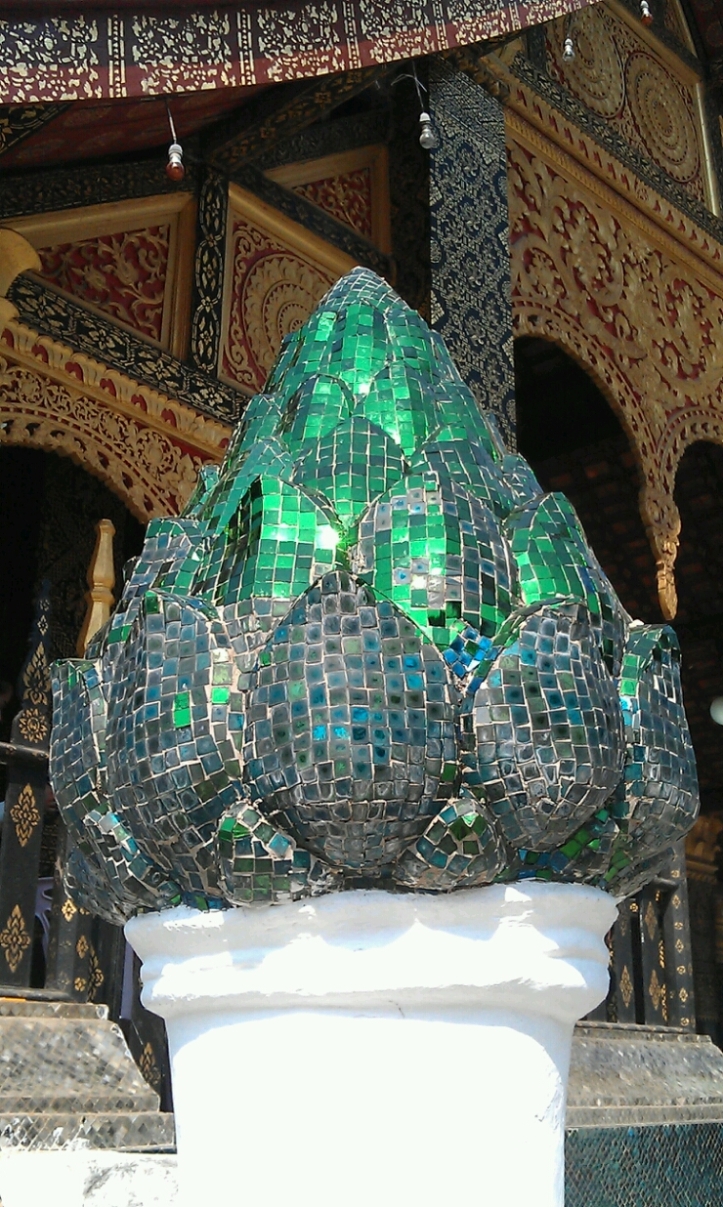 It has a selection of smart boutique hotels advertised through the high-end travel companies such as Hayes & Jarvis; mid-range / budget guesthouses; and it is also popular with backpackers with a range of budget hostel options.
However, even though the town is full of tourists, it still retains a great local life atmosphere, seemingly happily existing side by side. If you`d rather not eat in the tourist restaurants there are a number of places selling great cheap food, such as the baguette/crepe/smoothie stalls (our favourite for breakfast) & the night food market which are a great places to find both locals & foreigners mingling.
The night craft market comes to life with people from local villages selling handicrafts & textiles. 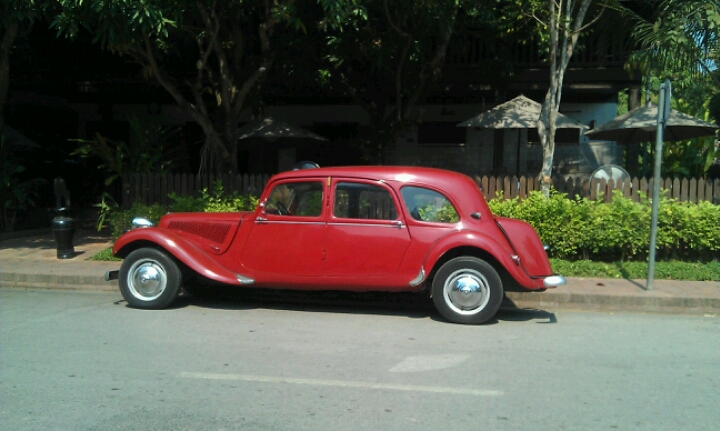 The Palace
Well worth a visit to understand the history of the previous monachy & see the home & gardens of the last king (Sisavang Vatthana) up to 1975 when the monarchy was abolished. You cannot take any photos but a nearby temple features the same mosiac walls by a French artist & you can take photos there. 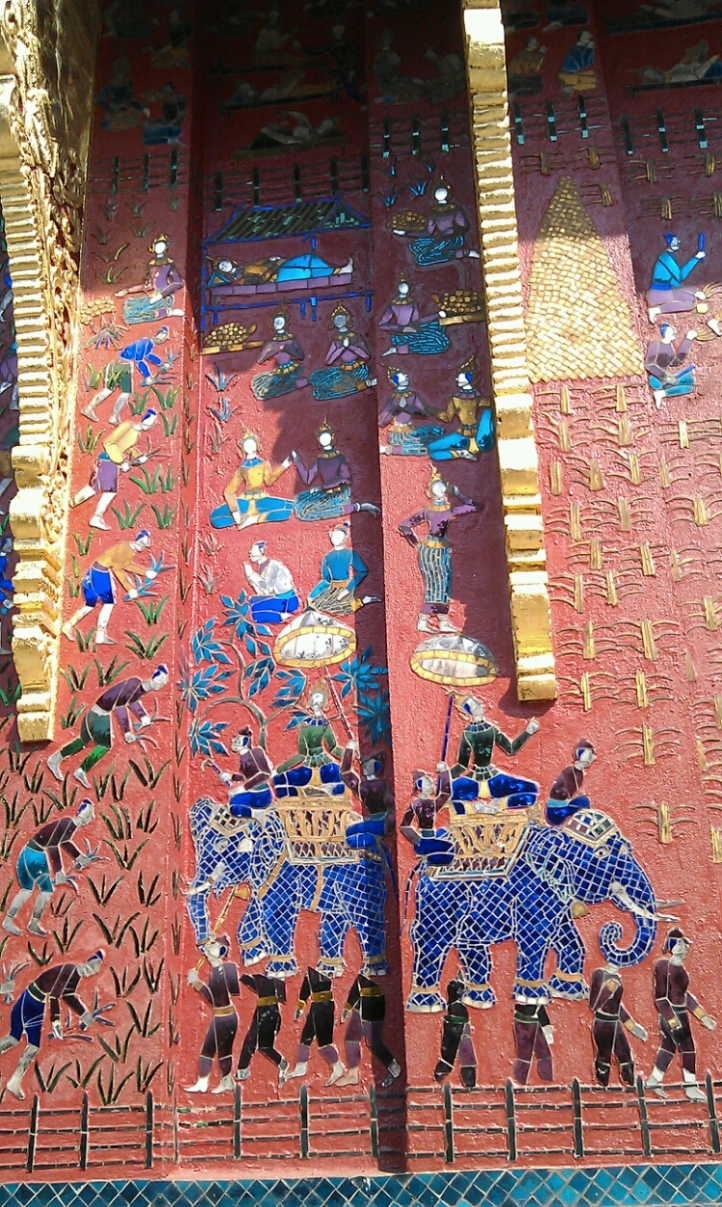 Tat Kuang Si Waterfall & Laos Bear Rescue Centre
The waterfall is truly amazing & you are able to swim in the pools if you desire. Tickets are cheapest for individuals, from the Tourist Office (mini van) or you can hire a songtaew as a group. If you want your own agenda, then hiring a tuk tuk is best, but more expensive. Entrance to the waterfall is 20 Kip & includes the bear centre.

Laos Bear Rescue See Free the Bears
Most of the bears at the centre are Asiatic Black Bears (Moon Bears) that were illegally captured from the wild as young cubs – it is likely that they were destined for use in the traditional medicine trade, where their bile is used.

Tak Bat
Each morning 100s of monks walk through the streets at daybreak in search of alms. We did not attend, as we had heard about tourists pushing flash guns in the faces of the monks, scrabbling to take photos & even touching the monks. Tripadvisor has many reviews about the religious ceremony turning into a fiasco tourist activity.  Therefore, we decided not to go, & hope to see it in a smaller village on our travels (from a discreet distance). In any case, we had a much more rewarding `Buddhist experience` 😉 at Big Brother Mouse, see below. 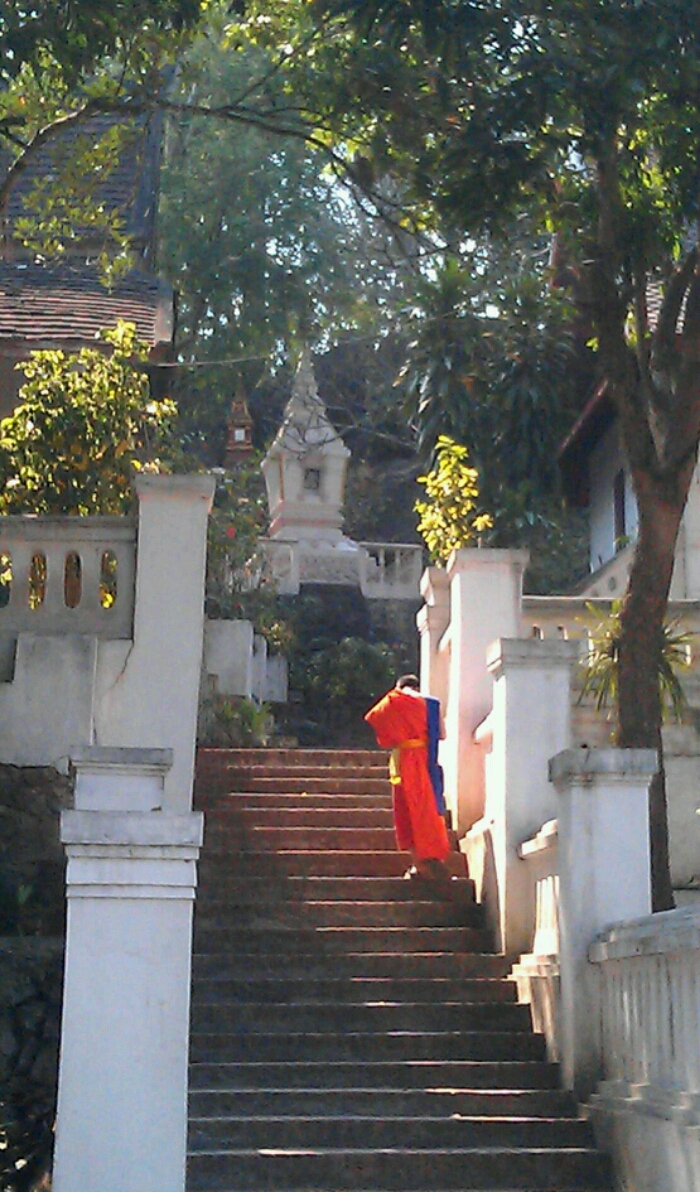 Temples
Luang Probang has 33 temples which are amazing. Mount Phou Si is a 100m high hill in the centre of the old town. On one side is the Mekong River and on the other side the Nam Khan River. The hill is a local religious site, and houses several Buddhist shrines. 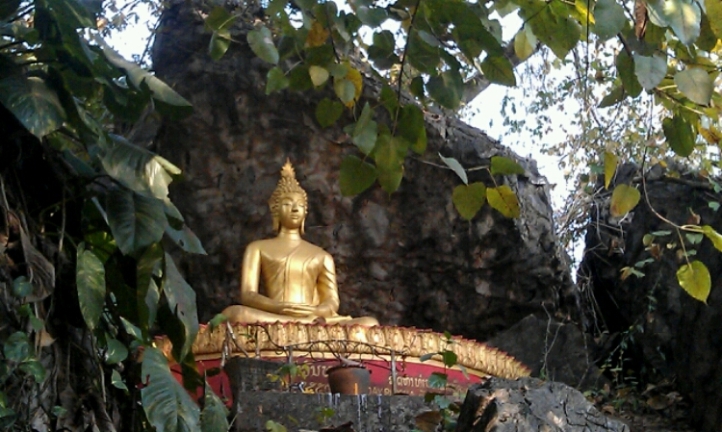 Trip on Mekong
Although we had seen the Mekong in Cambodia & Vietnam, the Mekong is joined by the Nam Khan here in Luang Probang, & the rivers & scenery are truly amazing here. Although the boats can seat 10+ people, there is a lot of competition & we ended up just the two of us. For a cheaper option, get together with a group or use your best haggling skills. We noticed that some boats had life vests, but many like ours, didn’t… shop around. We took an hour`s trip, but you can visit villages or the Pakau Caves if you prefer.

Big Brother Mouse – See Website
`… Traditionally, books have been rare in Laos. The number of children who go to school is slowly but steadily increasing, yet many children have never read a book outside of school …
Big Brother Mouse is changing that.` In Luang Probang, Big Brother Mouse also runs drop in English language sessions for students. 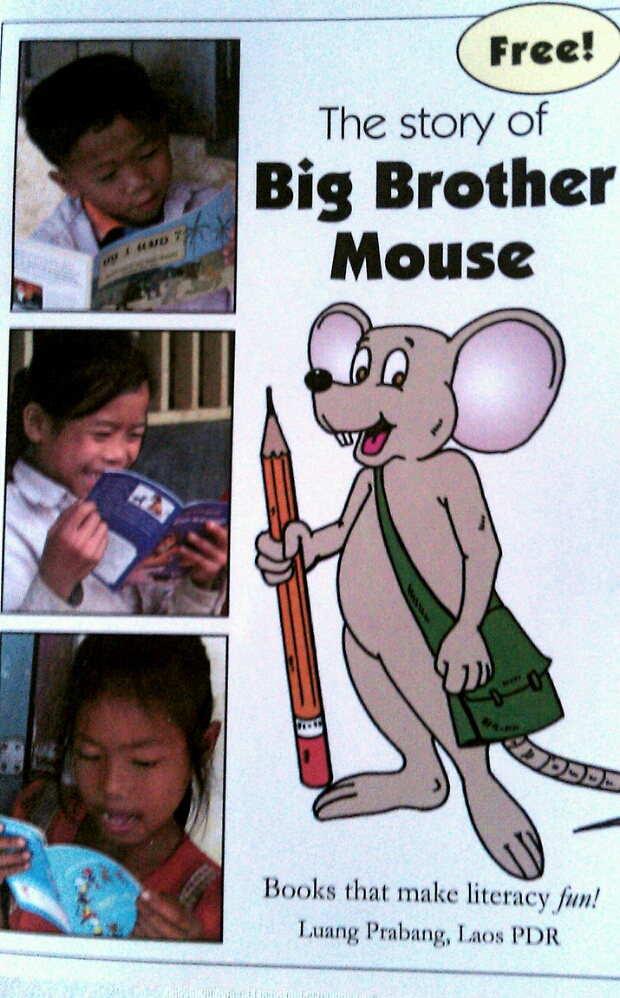 After reading about it on line, we went along & volunteered on 6 consecutive evenings, practising English with locals & helping them with their homework. We absolutely loved our time here & found it very rewarding. It is a great way to find out about local people from the ages 17- mid 20`s, the history of the country & life in Laos.
Colin had a group of novice monks on 2 evenings, and found out all about their lives, rules & Buddhism in general. Amongst other things, he found out: they have 5 items of clothing, making up one outfit; they get up at 3.30am & go to bed at 21.00; they are allowed mobile phones for education & contact, despite not having other belongings besides bowl, razor etc; they shave their heads once a month; they aren’t allowed to do sport or exercise; they can leave when they want; boys as young as 8yrs can join; why they are different types of Buddha statues & much much more!

Quite often my groups consisted of Hmong people who have a very interesting history & have been faced with persecution in more recent times. There are many Hmong tribes & their language varies. Hmong is their first language (Laos second). Many are determined to learn English to become teachers back in their villages.

The few girls who managed to come along seemed even more determined, although they were extremely shy. I tried to spend some dedicated time with them, so that they didn’t have to compete with their male counterparts.

What struck me most about all of them, was their motivation to learn, whether it be at school, college or for a lucky few university. They were often miles away from their families, holding down several jobs & spending the remaining hours of the day studying & learning English. The pressure of the responsibility of doing well in their education, essential to their success in life & their ability to help their families.

We loved Luang Probang & could have easily stayed longer. However, we were keen to find a less touristy Laos, so booked bus tickets to a village further North.