The indigenous people of Panama

Panama apparently has 7 groups of indigenous people, so far we have come across 2.

In the Chiriqui province, we met the Ngäbe Bugle people.

The Comarca Ngäbe-Buglé was formed in 1997 when the Panamanian government finally granted land rights to the group. It is a huge area of 6968 square kilometers.

The Comarca actually consists of two different but similar indigenous groups – the Ngäbe and the Buglé. The Buglé are much less in number and are situated towards the northeastern part of the Comarca. The majority of indigenous persons that have migrated to the provinces of Chiriqui and Bocas del Toro are of the Ngäbe group. 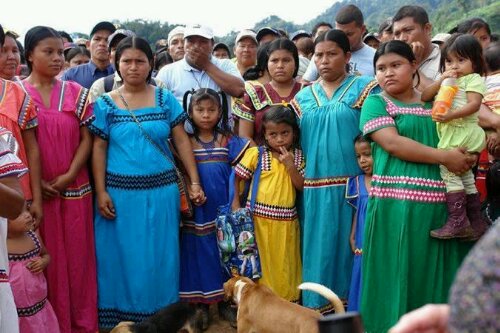 In Panama City we came across the Kuna Yala who live on the nearby San Blas  islands.

The region is a strip of land of 320,000 hectares along the Atlantic. It is composed by 360 tropical islands of which only 60 are inhabited. The Kuna people have their own political and economic system and have retained traditional dialect and costumes.

Information regarding history taken from Wikipedia. Photos courtesy of Habla Ya language school.